Home / Blog / Car Accidents Caused by Debris in the Road

Drivers face enough hazards on the roads each day without having to worry about foreign objects scattered across the highway. Reckless or drunk drivers, weather conditions, traffic congestion, and distracted drivers can make the evening commute home or a family road trip an exercise in accident avoidance. When you add potholes, tire treads, and other debris into the mix, the roads can feel like a war zone. But who is responsible for the road debris that caused your accident? While it won’t be easy, you may be able to hold the party who left the object behind responsible for your damages. 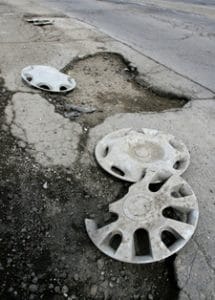 What Happens When You Encounter Debris

When an unexpected object appears in your direct driving path, you will likely do whatever you can to avoid it. You may momentarily forget about the cars around you and take action which could lead to a crash with another vehicle. If you don’t manage to avoid the object, the impact could damage your car and you could be injured. When encountering road debris, you may inadvertently take any of the following actions:

No matter how you handle an encounter with road debris, you should not be responsible for the damages that result from an accident. Unfortunately, drivers often have no other choice than to file a claim with their own insurance company and take a hit when their premiums go up. However, if you can prove who is liable for the debris being on the road, you may be able to hold them responsible for your damages.

If your damages were caused by a pothole or debris from damaged roads or overpasses, the state or municipal government responsible for the road’s maintenance could be considered to have breached its duty of care in not maintaining the road. However, government entities often have immunity from claims of negligence, so pursuing these claims are often not worth it. Even if immunity does not apply in a particular case, you are limited in the amount of time you have to file the claim—usually 60 days, meaning you would have to act very quickly to pursue a claim against a government agency.

When the debris fell off a car or truck, you may be able to hold the driver liable, but only if you know who it was and have evidence that the debris came off of his or her vehicle. Establishing this fact will be very difficult without an eyewitness to the event or video footage from a security or traffic camera. If there is evidence of the debris falling off a commercial truck that was improperly loaded, you may also have a claim against the trucking company for failing to ensure their employee’s compliance with safety regulations.