The nation was shocked in March 2016 by the horrific crash in Texas involving a church van and a pick-up truck that left 13 passengers in the van dead and two more seriously injured. The driver of the truck was later found to have a variety of prescription drugs as well as marijuana in his system when he veered into the oncoming lane.

While the driver of the passenger van wasn’t at fault, this tragedy highlights some of the dangers inherent in large passenger-hauling vans. Before renting one to transport a large group of people, learn more about the risks and steps you can take to make a trip in a passenger van as safe as possible.

What Makes These Vehicles Dangerous? 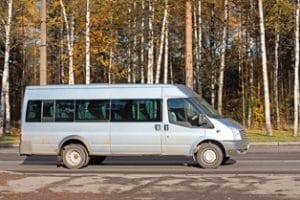 Large passenger vans like the Ford E350 involved in the Texas crash are designed with maximum carrying capacity in mind.

Many of them don’t have a lot of bells and whistles, and they’re often purchased by churches and schools or rented for short-term use.

According to the National Highway Transportation Safety Administration (NHTSA), these vehicles are at a higher risk of rollover than smaller vans and trucks. In fact, the chance of a rollover is significantly higher when carrying more than 10 passengers than when carrying fewer than five. Ford’s newer Transit van, the Chevrolet Express/GMC Savannah, the Mercedes-Benz Sprinter, and the Nissan NV3500 are all 12-15 passenger vans with increased rollover risk.

Even though these vans can carry up to 15 people, the driver isn’t required to have a commercial driver’s license as a public bus driver would. Inexperienced drivers may not know how to properly control a large vehicle and may have difficulty staying focused while carrying many noisy and active passengers.

These vehicles are required to have seatbelts, but often only have lap belts in the back rows and passengers may not wear them because they believe the vehicle is safe due to its size. In the Texas church van crash, it’s believed that most of the passengers were wearing lap belts, but that the belts weren’t adequate to protect them in the car accident.

How to Make a Passenger Van Trip as Safe as Possible

NHTSA and the National Transportation Safety Board (NTSB) are well aware of the risks associated with large passenger vans. They recommend taking the following steps to ensure your next group road trip is as safe as it can be: