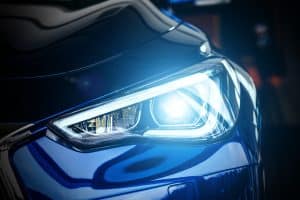 Who among us hasn’t forgotten to turn off our high beams when we’re driving at night and another car approaches from the other direction? It is a common mistake, but one we should be aware of making. Accidents happen every year when one driver is blinded by the high beams of another car.

Missouri has strict laws on headlights – what color they should be, what height they need to be at, their brightness, and times when you should be using them. It is important to be aware of these laws so that if you get into an accident, you know your rights; and it helps you to not break those laws yourself and prevent you from causing an accident.

What are the headlight laws in Missouri?

Missouri has quite extensive requirements for the headlights on your car. These laws and regulations are in place to help prevent car accidents at night. According Missouri statute §307.070:

Every person driving a motor vehicle equipped with multiple-beam road lighting equipment, during the times when lighted lamps are required, shall use a distribution of light, or composite beam, directed high enough and of sufficient intensity to reveal persons and vehicles at a safe distance in advance of the vehicle, subject to the following requirements and limitations:  Whenever the driver of a vehicle approaches an oncoming vehicle within five hundred feet, or is within three hundred feet to the rear of another vehicle traveling in the same direction, the driver shall use a distribution of light or composite beam so aimed that the glaring rays are not projected into the eyes of the other driver, and in no case shall the high-intensity portion which is projected to the left of the prolongation of the extreme left side of the vehicle be aimed higher than the center of the lamp from which it comes at a distance of twenty-five feet ahead, and in no case higher than a level of forty-two inches above the level upon which the vehicle stands at a distance of seventy-five feet ahead.

There are other laws that prohibit your car from having any color lights other than white. §307.095:

Headlamps, when lighted, shall exhibit lights substantially white in color; auxiliary lamps, cowl lamps and spot lamps, when lighted, shall exhibit lights substantially white, yellow or amber in color. No person shall drive or move any vehicle or equipment, except a school bus when used for school purposes or an emergency vehicle upon any street or highway with any lamp or device thereon displaying a red light visible from directly in front thereof.

These laws exist for a good reason, and it is important that people follow them as closely as possible. There are already enough hazards on the road without including being blinded by high beams.

Yes, headlights are getting brighter

Car accidents happen pretty frequently because of high beams. A New York Times article from 2021 discusses the issues drivers have with newer headlights and high beams: “advances in lighting technology have improved nighttime driving for many, but the introduction of brighter lights that also sit higher on S.U.V.s and pickups has given rise to widespread criticism that headlights have become overpoweringly intense.”

The criticism is valid. As the Times explains, “In the 2010s, LEDs became popular because they were longer-lasting, energy-efficient and perceived by automakers as sexy and modern.” They’re also much brighter than “sealed-beam headlights” (1950s-80s), halogens (late 80s through the 1990s), and high-intensity discharge lights (1990s through 2010s).

Why are brighter headlights dangerous?

The main problem with too-bright lights is two-fold. First, a driver can be momentarily blinded, causing him or her to swerve, hit the brakes, or behave in an otherwise unexpected way. These behaviors can increase the risk of a rear-end collision or a lane departure, leading to a sideswipe accident. The second issue is the glare (or “halo” effect) that the lights throw off. Even from far away, high beams can cause a glare around more than just the front of the car. This glare can hide potential hazards in the road. For example, if there is a deer on the side of the highway, two cars driving toward each other with bright lights can make it impossible for either driver to see that deer.

What are car companies doing to fix the problem?

The article also outlines what measures manufacturers are taking to reduce blinding drivers s. Some of these measures include headlights that automatically switch from high beams to low beams when it senses another car in front of it. Another measure that only recently became legal in the United States is adaptive driving beams. These headlamps rely on sensors that detect oncoming traffic and automatically adjust the brightness levels of your head lights so that you can see the road in front of you, but not too bright as to blind those approaching.

Headlights started off as a precaution against getting into accidents at night but have very recently also become a hazard in themselves. Headlights that are the wrong color, too bright, or shine at a height can be a hazard to any drivers approaching from the other direction. If you have been in an accident that was caused by high beams or illegal headlights, it is important that you contact Kansas City Accident Injury Attorneys. Our experienced Kansas City car accident lawyers can help file a lawsuit against the driver who caused your accident and any injuries from it. To schedule an appointment, call 816-471-5111 or fill out our contact form. We offer free consultations at our office in Kansas City, MO. We also maintain offices in Lee’s Summit, Parkville, and St. Joseph, MO and in Olathe and Overland Park, KS.