Our client was a 72-year-old Kansas City area woman who exercised regularly and walked at a local shopping mall without difficulty. Following an abnormal result on routine blood work, her primary care physician referred her to a hematologist for evaluation of Pancytopenia, a medical condition in which the number of red and white blood cells is reduced. It is usually due to a disease affecting the bone marrow. 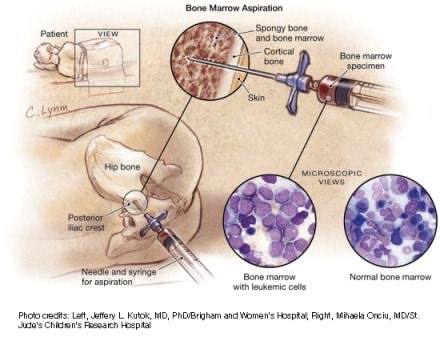 Our client indicated that these procedures hurt very badly and after they were completed, she could not move her right leg. The hematologist felt that she might have had a superficial nerve injured during the procedure and told her that the feeling would subside. Over the course of the next week, our client continued to have substantial problems with her hip and a C.T. scan was ordered. The scan revealed a 4.2cm mass in the region of the piriformis muscle in the sacrosciatic notch. The reporting radiologist indicated that this most likely represented a hematoma or possibly a pseudoaneurysm involving the internal iliac artery or gluteal artery.

A hematoma is a collection of blood outside the blood vessels generally the result of internal bleeding.

A pseudoaneurysm is a hematoma that forms due to a leaking hole in an artery. It typically is the result of trauma from an invasive medical procedure. Following the C.T. scan, the hematologist felt that our client was suffering a hematoma and that this was irritating the sciatic nerve and causing her leg and hip pain. She continued with follow up treatment, but this continued to suggest that the problem was due to a pseudoaneurysm caused at the time of the bone marrow biopsy.

Ultimately, our client was hospitalized on three occasions as a result of this problem. During two of the hospitalizations, an embolization procedure was performed in an effort to prevent further bleeding and resulting pressure on our client’s sciatic nerve. Embolization is a minimally-invasive radiological procedure performed by an interventional radiologist where blood vessels are purposely blocked in order to stop blood flow to an area of the body. In so doing, an aneurysm can be blocked.

Although these procedures were successful in stopping the bleeding, they were unsuccessful in completely remedying our client’s physical problems. She continued periodically to experience intense pain in her right leg that prevented her from undertaking her usual daily activities. Further evaluation failed to show the cause of the ongoing complaints and it was ultimately felt that our client had developed some permanent nerve damage.

Proof of Negligence Resulted in an Out of Court Settlement

After written demand was made upon the hematologist’s liability insurance carrier, the matter was thereafter settled without suit being filed. Such settlement took into consideration our client’s medical expenses, her pain and suffering throughout the treatment process and the ongoing permanent nature and extent of the injuries to our client.