Home / Blog / Learning to Use Diverging Diamonds Interchanges in Kansas

Most people are adverse to change. We get set in our routines and, no matter how inefficient or dangerous that routine is, we often prefer to stick to it than to try something new. When it comes to traffic patterns, however, drivers don’t usually have a choice. When a city or county traffic department or road commission decides to install a new intersection, for example, we must simply endure the construction and deal with the change when it opens. 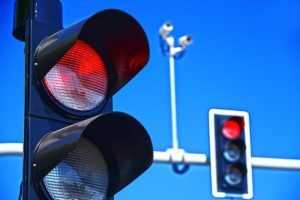 This is true in the Kansas City and Overland Park areas for the last several years as more diverging diamonds interchanges  (DDI) are being installed at major highway entrances. However, the effects of these new patterns have been overwhelmingly positive once people get used to them. Before you encounter your first DDI, learn where they are and how they work.

Where You Can Find DDIs in Our Area

Local officials and traffic engineers approved the DDI design at Front Street and I-435, and the project was slated for completion in 2008. Unfortunately, the project was delayed several times and as a result, the first DDI opened in Springfield, MO in 2009. The original location in Kansas City did eventually open.

Since then, DDIs have opened in the following locations in our area:

In addition, a DDI is in the planning stages for I-435 and MO 210 in Randolph. These ten locations make Kansas City/Overland Park home to more diverging diamonds intersection than any other urban area. So, when you encounter one of these interchanges, what do you need to know?

How to Navigate a Diverging Diamond Interchange

While studies have shown that DDIs are more efficient and safer than traditional highway interchanges, people tend to be overwhelmed at first site. Not only are there many signs telling drivers what to do and not to do, but flashing lights add to the confusion. On top of that, drivers must cross over to the “wrong” side of the road, something that makes drivers very uncomfortable.

Until you actually drive through a DDI, it’s very hard to picture how it works, but we offer these tips that may help the first time you encounter a DDI:

While studies show that crashes have been reduced at highway interchanges by 60 percent when a DDI is installed, collisions still happen. Most of these crashes are caused by sudden lane changes as drivers try to figure out which lane they are supposed to be in. Understanding where you need to be before you enter the interchange will significantly reduce your risk.