Home / Blog / What Should I Know About Head-On Collisions? 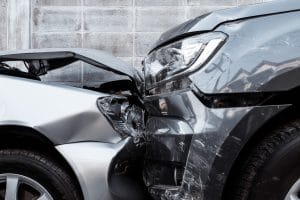 Head-on collisions are the most dangerous car accidents, often leading to severe and catastrophic injuries. In many cases, the impact of the crash is severe enough to cause a fatal injury. For those who survive these accidents, the repercussions can last a lifetime.

Head-on collisions are a type of car accident when two vehicles heading in opposite directions collide with each other. What makes these types of crashes so dangerous is that the full force of the crash is directly applied to the occupants in the front seats. While we have seatbelts and airbags, they only protect us from so much, and if you are traveling fast enough, they might not offer enough protection to keep you from suffering from a severe injury. According to the Missouri State Highway Patrol’s data for 2019, there were 1,996 wrong side/wrong way crashes – the leading causes of head-on collisions – resulting in 99 fatalities and 1,378 injuries.

What are the main causes of head-on collisions?

What are the most common injuries from head-on collisions?

The National Highway Traffic Safety Administration (NHTSA) “found that a head-on crash between two similar vehicles traveling at the same speed would result in severe brain and neck injury and likely result in leg fractures.” The NHTSA also reported a “58% fatality rate for vehicle occupants in frontal impact crashes in 2017. A head-on crash is more likely in a rural area, and 13% of all rural fatal crashes are head-ons. In urban areas, fewer than 7% of fatal crashes are head-ons.”

Head-on collisions are the most dangerous category of crash we can get into, often leading to catastrophic injuries. These types of accidents are the ones we want to avoid the most. At Kansas City Accident Injury Attorneys, we hold negligent drivers accountable if you have been injured in a head-on collision. Call 816-471-5111 or fill out our contact form to schedule a free consultation at our office in Kansas City, MO. We also maintain offices in Lee’s Summit, Parkville, and St. Joseph, MO and in Olathe and Overland Park, KS.