Home / Blog / Wrong-Way Accidents and How to Avoid Them 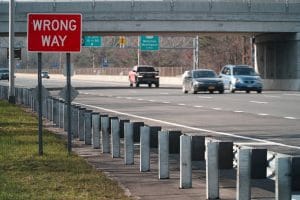 The most important rule on the road is to follow traffic laws and drive in a safe and responsible manner. However, even if you take every precaution behind the wheel, it’s nearly impossible to protect yourself from careless, negligent, or impaired motorists. Wrong-way drivers can be especially dangerous to other people on the road, often causing high-speed, head-on collisions resulting in serious or fatal injuries.

Dr. David Yang of the AAA Foundation also explains, “Wrong-way crashes on divided highways are often fatal as they are typically head-on collisions. And unfortunately, as the data shows, fatalities from these crashes are on the rise.”

Why do wrong-way accidents happen?

The FHWA reports 36,560 traffic fatalities in 2018, with 428 attributed to wrong-way crashes. Although as of this writing they have not tabulated the number of wrong-way crashes for 2019, that year saw 36,096 overall car accident fatalities, so it stands to reason that wrong-way accidents may have increased as well.

In their analysis, the AAA Foundation used nationwide data from the FHWA to determine the top factors leading up to wrong-way accidents and head-on collisions. These are the top three:

An investigation into wrong-way driving

Even though it was released all the way back in 2012, the NTSB’s “Wrong-Way Driving” special investigation report still applies today, in terms of the finer details regarding wrong-way car accidents. This information includes the following:

They also found the three most common actions leading to a wrong-way accident are when a driver:

Although wrong-way accidents may not happen frequently, when they do, they can cause severe injuries or fatalities to other drivers and passengers.

How can I avoid a wrong-way driver?

Most wrong-way accidents occur on divided highways and roads with medians rather than concrete dividers. If you are driving and see the unthinkable – headlights coming directly at you – try to take the following actions:

If you are in an accident with a wrong-way driver, do not leave the scene. Contact authorities and wait for them to arrive on the scene. Police can take a formal report, and paramedics can treat you for your injuries.

Then, contact Kansas City Accident Injury Attorneys for legal guidance. We can investigate why your accident happened, who caused it, and who should be responsible for your injuries and losses. You shouldn’t have to worry about bills and expenses while you are trying to recover from your injuries. We can help. To schedule a free consultation at our offices in Kansas City, MO, call 816-471-5111 or fill out our contact form. We also maintain offices in Lee’s Summit, Parkville, and St. Joseph, MO and in Olathe and Overland Park, KS.