Home / Blog / Larger Vehicles and the Rise of Pedestrian Accidents 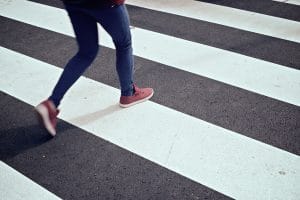 A recent study conducted by the Insurance Institute for Highway Safety (IIHS) may add some validity to those assumptions. The new study revealed that drivers of larger vehicles like SUVs and pickup trucks are more likely to initiate pedestrian accidents while making turns compared to drivers of other vehicles.

Increase of larger vehicles on the road

One of the authors of the study and vice president of the organization’s research, Jessica Cicchino, believes that the link between larger vehicles and common pedestrian accidents could point to another reason for how the increase of SUVs is changing the scope of car accidents.

The National Highway Traffic Safety Administration (NHTSA) notes that there were 6,519 pedestrians that were killed in the United States during 2020. Compared to the pedestrian deaths in 2009 and 2019, pedestrian deaths were up to a 59 percent increase from 2009 and a four percent increase from 2019. Around the same time period, there has been a noticeable increase in the purchase of SUVs and pick up trucks. According to the Tampa Bay Times, which cited data from MotorIntelligence.com, “SUV and pickup truck sales have skyrocketed. In 2009, pickup trucks, SUVs and vans accounted for 47 percent of all U.S. new vehicle sales, according to Motorintelligence.com. Last year, light trucks were more than three-quarters of new vehicle sales.”

The authors and researchers at IIHS studied both the federal data of pedestrian accidents and the statistics of pedestrian accidents from 2010 to 2018. The data revealed that pick up trucks were 42 percent more likely to strike pedestrians in the process of making left turns compared to other vehicles. SUVs were found 23 percent more likely to strike pedestrians compared to other vehicles.

“A Pillars” of SUVs, pick up trucks, and vans

According to the IIHS, larger vehicles like trucks, vans, and SUVs are required to comply with federal roof-strength standards that prevent a collapse in the event of a rollover accident. As a result, these vehicles contain thicker “A Pillars” than the average vehicle. The pillars are used to help withstand the larger weights of the vehicles.

How manufacturers can resolve this dilemma to make roads safer

Authors of the IIHS study suggest that manufacturers can decrease the size of A Pillars in larger vehicles to help maximize visibility for drivers. One way that A Pillars can become smaller is for vehicle manufacturers to use stronger metals. Another study author, Wen Hu, suggests that there are other ways to increase the strength of A Pillars without increasing the size of the pillars. Other solutions that the authors recommend are examining the sight lines of larger vehicles and installing an automatic emergency braking system that can detect the presence of pedestrians.

What if I’m injured in a car accident with an SUV or pickup in Kansas City?

Until manufacturers start taking responsibility, though, pedestrians, cyclists, and drivers can rely on Kansas City Accident Injury Attorneys to help you if you are hurt in a wreck. Our experienced injury lawyers will be by and on your side, helping secure the compensation you need for you:

We’re not afraid to go head-to-head with the insurance companies to fight for the best possible outcome for you. Let us focus on your case so you can focus on healing. When you need help, Kansas City Accident Injury Attorneys is always nearby and ready to get to work for you. Call 816-471-5111 or fill out our contact form to schedule a free consultation at our office in Kansas City, MO, or at one of our other office locations: Lee’s Summit, Parkville, and St. Joseph, MO and in Olathe and Overland Park, KS.